With the number of downloads for COVIDSafe app reaching 6 million over the weekend, the Governments target of 40%, or 7.4 million* downloads is still realistic (*based on 18.6 million mobile phone users).

Whilst 6 million Australians have been willing to support the cause and help stop the spread, there are still many that are hesitant to do so.

Some don’t like the privacy aspect, some are concerned around the app being secure, whilst others listen to the conspiracy theories.

Whatever the case, this article looks at nine realistic reasons why you should consider downloading the COVIDSafe app.

1. COVID-19 may be here to stay, indefinitely

Whilst some speculate that a vaccine is months away, others are not so sure. But regardless of the date, we need to consider the possibility that coronavirus will never be eradicated.

The World Health Organisation’s Emergencies Director, Dr Mike Ryan, said we could be living with the virus indefinitely.

“It is important to put this on the table: this virus may become just another endemic virus in our communities, and this virus may never go away,” Dr Ryan told an online press briefing.

“HIV has not gone away, but we have come to terms with the virus. I think it is important we are realistic and I don’t think anyone can predict when this disease will disappear.”

With this in mind, for the app to be effective, is not just during the times of the pandemic, but ideally, the community should be proactive in retaining the App with them well-after ‘social-distancing’ regimes are wound-down or lessened.

So if you think there’s no need to download the COVIDSafe app because this thing will pass in the next few months, you are wrong.

2. The Government continue to update the app and protect its users

The app is being updated regularly as it works with developers and programmers to ensure the app is a fortress.

Additionally, COVIDSafe protections were passed into law on May 12. The legislation was passed by both houses without amendments. “This legislation clearly defines the very limited circumstances in which COVIDSafe data can be collected, used or disclosed, as well as prescribing significant criminal and civil penalties for any misuse,” Attorney-General Christian Porter said.

“That includes jail terms of up to five years, or a fine of $63,000 per offence. It is also a criminal offence under the legislation for anyone to coerce a person to use the app, to store or transfer COVIDSafe data to a country outside Australia, and to decrypt app data.”

3. The app will help prevent more cases and deaths

Only this week in Victoria, an infected patient testing positive to COVID-19 fortunately had the app installed on their phone. Victorian health officials began using data from the COVIDSafe app on Monday night, after the patient gave permission to do so.

Victoria’s announcement makes it the first state to publicly acknowledge using COVIDSafe app data to help with contact tracing. And whilst number of new cases in Australia is dwindling, but COVIDSafe has regularly been touted as a method to ensure that the virus doesn’t spread as restrictions ease.

Example, if you were in the grocery store and accidentally made contact with a stranger that was unknowingly carrying COVID-19. Soon after they test positive. If you both had the app activated, you would be notified by health authorities immediately. Thus preventing you from unknowingly passing it on to your friends, family and loved ones. Which then creates the domino effect.

4. Older adults are more at risk of severe illness and death

People aged 70 years and over, people aged 65 years and over with chronic medical conditions, people with compromised immune systems, and Aboriginal and Torres Strait Islander people over the age of 50, are at greater risk of more serious illness if they are infected with coronavirus.

As we know, coronavirus is dangerously contagious. So if you are in the above bracket, and you have a friends and loved ones in the same age bracket, wouldn’t you want to ensure you are being proactive in the cause to fighting the spread?

Yes, that’s right. If you download the COVIDSafe app, and have second thoughts, you can delete the app and it will be removed from your device.

6. Your daily movements are not tracked by the app

The Government has stated numerous times that there is absolutely no plan to track your location and every day movements.

The app only records which users have come into contact with each other, not location data, and that data will only be accessible by health authorities should you become infected and allow doctors to access the data.

7. Many popular apps on your phone know much more about you than COVIDSafe

Yes, many popular apps that you are using every day, whether it be social media, games, search engines and map navigation… these are the apps tracking your movements and accessing your data and information.

Put simply, if you have apps on your phone such as Instagram, Facebook, Pinterest, Snapchat, Tik Tok or even Google Maps, then downloading the CovidSafe app is the very least of your worries.

Michael Sentonas, the chief technology officer for global cybersecurity firm CrowdStrike, said he would be comfortable using the app, and that other apps that people download to their phones were far more intrusive. “The general public have no problem downloading what they perceive to be a fun app and they don’t look to see what data is collected off the phone,” he said.

8. Hackers are less likely to attack the COVIDSafe app

The information used for the tracing app provides a lot less valuable information to hackers than other apps for monetary purposes.

For example, to register for COVIDSafe, you only need to enter your name, mobile number, age range and postcode. COVIDSafe will not collect your location information. The app will note the time of contact and an anonymous ID code of other COVIDSafe users you come into contact with.

Michael Sentonas, the chief technology officer for global cybersecurity firm CrowdStrike, said collecting the data was not without risk, but there were far more accessible targets for hackers. “If the limited information that is going to the central server is attacked, based on what everyone is saying, the scope of what is there is going to be a lot less valuable to an adversary versus the thousands of other locations and businesses they could target to get information,” he said.

The only appeal to hackers infiltrating COVIDSafe would be for political reasons such as making a statement or attempting to embarrass the Government.

This week alone, more than 300 of Australia’s leading technology professionals have voiced their public support of the COVIDSafe app.

In a series of print advertisements being run in The Australian and Australian Financial Review, 310 senior ACS members said they had downloaded and were using the app.

“With the economic crisis kicking in, and restrictions starting to be lifted, data access and use will be critical to suppressing future contagion,” said ACS CEO, Andrew Johnson.

“So, what we wanted to do in this Team Australia moment, was identify some senior influencers amongst the ACS membership who believe that, while not a silver bullet, appropriate data capture and use is an important strategy for health care professionals to protect those that are most vulnerable and will assist in suppressing the virus.” 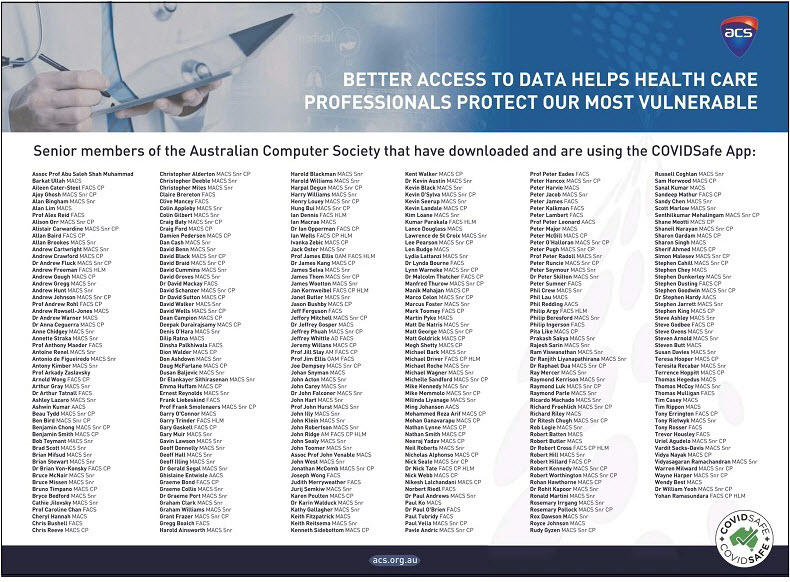 In conclusion, with more people having the app active on their phone, will help reduce the spread of COVID-19, and hopefully see Australian opening its State borders and all businesses soon.

But it’s important to remember, just because you’ve downloaded the app, does not mean you can put your guard down. Maintain social distancing, wash your hands regularly and continue to follow the health protocols.

For more information on the COVIDSafe app including security and privacy concerns, read our COVIDSafe FAQ article What we know about the coronavirus tracing app, COVIDSafe app.