The Australian Prudential Regulation Authority (APRA) has revealed the best and worst superannuation fund products in Australia after releasing the superannuation statistics for the June 2021 quarter.

A total of 76 MySuper investment options have been graded as either “pass” or “fail” — based on the Australian Prudential Regulation Authority’s (APRA) test of comparison of fees versus performance over seven years.

The first annual performance test revealed that $56.2 billion is invested in underperforming products, with these products holding almost 1.1 million accounts.

On Tuesday, 13 big-name funds’ products were shown to have failed the financial watchdog’s performance test.

It’s important to note that this is not specific to the super fund performance itself, but the various products within the fund’s portfolio that members have selected (or been allocated by default).

The differences between the best products and the worst products on YourSuper are stark.

Being in a consistently high performing super fund is one of the key factors in growing your super balance over time. Members of consistently poor performers are at risk of having substantially lower super balances at retirement.

Of the top 13 products for investment returns, nine are managed by industry funds, two are administered by retail funds, and two are restricted corporate schemes, including one for Westpac staff.

All of the figures are based on a 30-year-old member with a balance of $50,000. However, the tool allows users to customise the rankings based on their age and super balance.

The best performing super funds by product achieving above a 9% return: 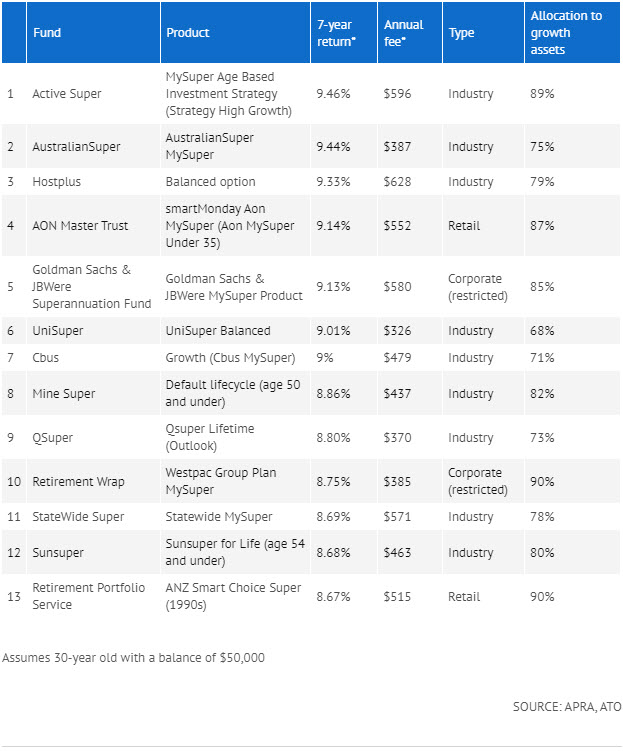 The 13 worst super funds based on product performance

The corporate regulator (ASIC) has warned the nation’s 13 worst super funds against providing their 1.1 million members with “misleading” information about their performance.

Under the new laws the 13 funds, which collectively hold $56 billion in assets, will be forced to send a pro-forma letter to the 1.1 million affected members by the end of September telling them their super is sitting in a product that “has performed poorly”.

The annual test evaluates how default MySuper products have performed over the past seven years, adjusted for fees, relative to a benchmark calculated by APRA.

The benchmark, which differs across funds, measures what a product should have returned over the past seven years based on its asset allocation and the average level of fees across the super sector.

Funds that underperform their benchmark by more than 0.5 percentage points are deemed to have failed.

Underperforming funds could be banned from accepting new members into their MySuper products if they fail the test again next year.

Of the 13 funds that failed, four were retail funds, five were industry funds, two were public sector-run and two were corporate schemes.

The top five largest super funds with underperforming products are:

The performance test is a key plank of the Morrison government’s sweeping superannuation reforms, which passed Parliament in June.

“The government is hauling performance out of the darkness and into the light – and the bright sunlight of accountability will be an uncomfortable reality for some,” she said.

“The Your Future, Your Super reforms are estimated to save Australian workers $17.9 billion over 10 years,” Minister Jane Hume.

KPMG superannuation specialist David Bardsley said the performance test would spur further consolidation in the $3.3 trillion super sector, which has already witnessed the exit of 58 funds over the past five years.

“The outcome is good for consumers and good for the system,” he said.

Super Consumers Australia director Xavier O’Halloran says members of funds that have failed APRA’s performance should check if there is a better fund for their retirement savings.

“They [super funds] have had plenty of time to fix this, they have been given plenty of leeway as well in the way the test works. If they’ve failed, then consumers really have to weigh out what this fund is offering.”

Visit the government’s YourSuper comparison tool to find a better product. The tool is accessible through MyGov and the Australian Tax Office website. It ranks default MySuper products by their annual performance over a seven-year period and the fees charged to members.

While the tool’s default setting is to sort products by fees, by far the biggest gains to your retirement savings will come from switching to a product that generates better investment returns.