Western Australia’s postcode 6210 was the State’s only suburb/town to make the top 10 list. With 13,145 pensioner residents, suburbs/towns comprise of Mandurah, Wannanup, Silver Sands, Erskine and Coodanup. 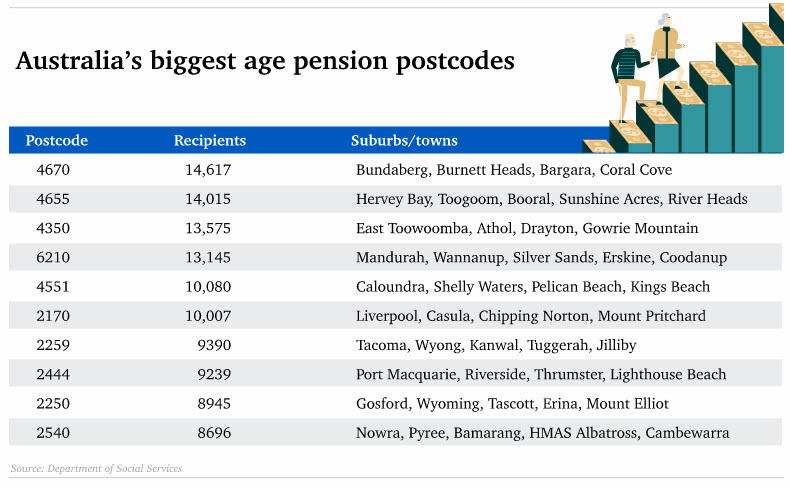 Mr McCrindle said the surge in Commonwealth Seniors Health Card (CSHC) holders suggested a rising number of seniors were asset rich. CSHC holders can have unlimited assets and its only financial barrier is a generous income test in which a couple earning $89,000 can still get the card and its attached benefits.

Association of Independent Retirees president Wayne Strandquist said just 50 per cent of people retiring today were relying on a full or part pension and the trend away from government welfare would continue.

“The proportion of people on a full age pension is diminishing,” he said.

Mr Strandquist said the CSHC was historically only held by age pensioners, but had been boosted by seniors groups urging retirees to check their eligibility, plus the government giving cardholders access to Covid stimulus payments last year.

“More and more organisations such as ours are campaigning among our memberships to make them aware that the Commonwealth Seniors Health Card and its benefits is a very useful thing to have. And it’s becoming much more valuable beyond the pharmaceutical benefits,” he said.

State governments are increasingly allowing CSHC holders to access discounts in areas such as transport, council rates and energy bills.

“A significant proportion of people between pension age and their 70s are still working, not necessarily full-time but it takes them out of the pension system,” he said.

“More people are retiring with more superannuation and other assets, and may return to the pension system later.”

Mr Yates said the latest data echoed the recent Retirement Income Review’s findings that the age pension was affordable to the nation for “as far forward as you can see”.

“The government and opposition ought to be thinking about reassuring future retirees that the pension is sustainable,” he said.