Survey results released on the Australian Bureau of Statistics (ABS)

A survey conducted by the ABS on the retirement and retirement intentions of Australians aged from 45 years and over (in age groupings) provide for an interesting read. The survey is named Multipurpose Household Survey (MPHS). Below are some of the key findings from the survey. 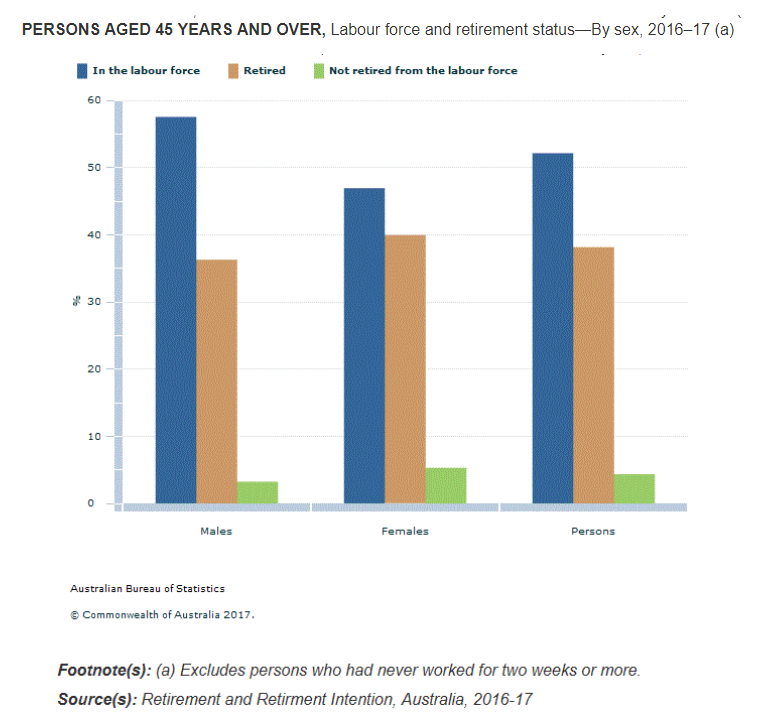 RETIRED FROM THE LABOUR FORCE 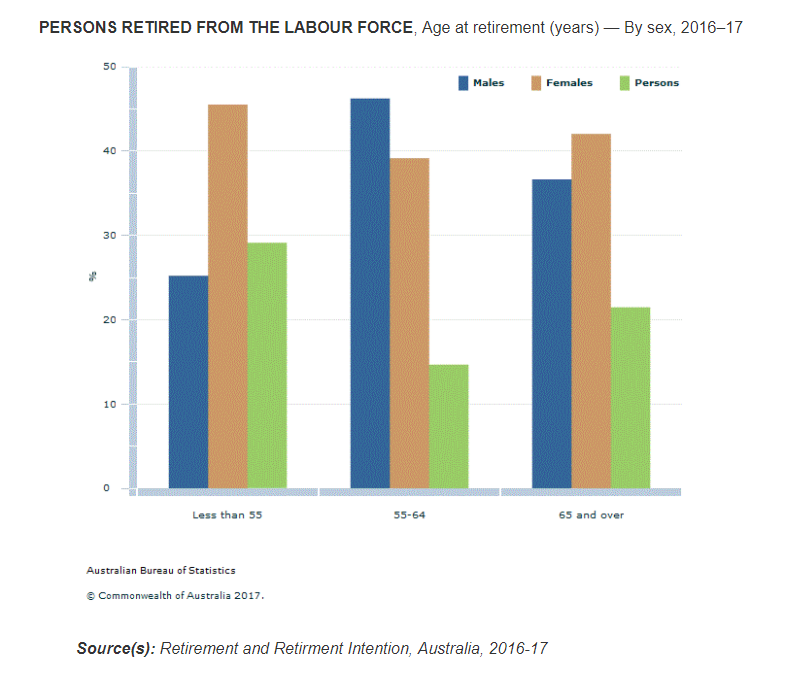 The average age at retirement for recent retirees (those who have retired in the last five years) was 62.9 years. Within this group, there was a difference between the retirement age of men and women, with women retiring a little younger than men (the average retirement ages for this group were 63.6 years for men and 62.1 years for women) (Table 3).

Among both retired men and women whose last job was less than 20 years ago, a commonly reported main reason for ceasing their last job was ‘reached retirement age/eligible for superannuation/pension’ (36% of men and 22% of women). These persons had average retirement ages of 63.5 years (64.1 years for men and 62.7 years for women). Other commonly reported main reasons given by persons for ceasing their last job were ‘own sickness, injury or disability’ (21% of men and 12% of women) and ‘retrenched/dismissed/no work available’ (7% of men and 5% of women) (Table 5). 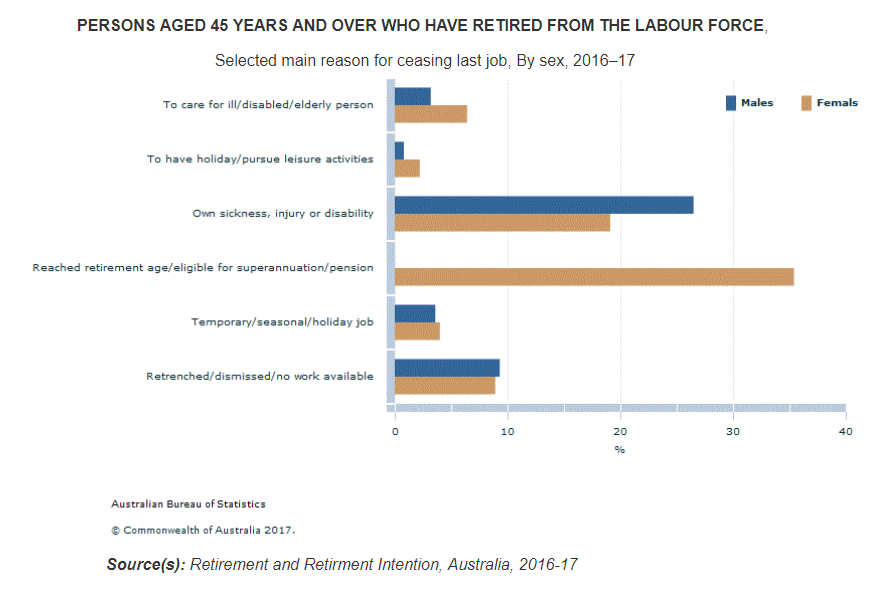 Sources of income during retirement 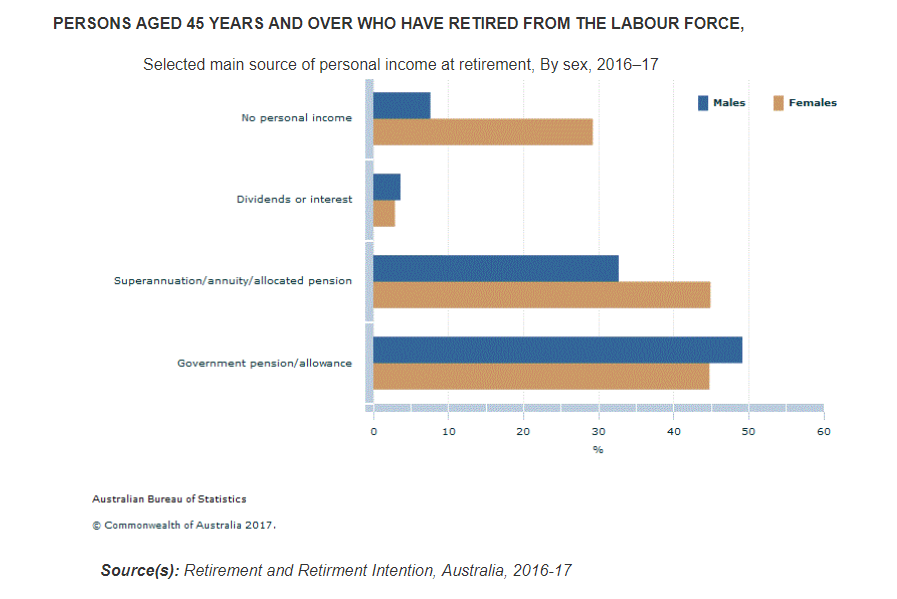 INTENTIONS TO RETIRE FROM THE LABOUR FORCE

Main factor influencing decision about when to retire

For those in the labour force who intended to retire, the most common main factors influencing their decision about when they would retire were ‘financial security’ (41% of men and 34% of women), ‘personal health or physical abilities’ (21% for both men and women), and ‘reaching the eligibility age for an age (or service) pension’ (13% for both men and women) (Table 9). 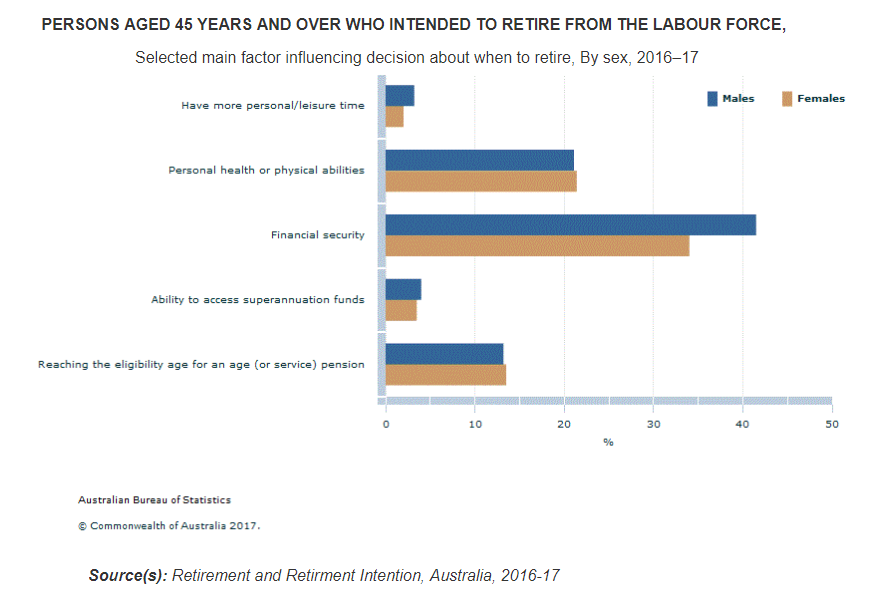