The growth rate for the 65-and-over age group was 3.7 % over recent years, compared with 1.4 % for the working age population and 1.7% for children.

In 2013, Tasmania remained the nation’s oldest state, recording a median age of 41.2 years, with Hobart having the oldest median age of all capital cities, at 39.7 years, ahead of Adelaide at 38.6 years.

More of us are enjoying a longer life, thanks to improvements in diet, public health and medical technology. In fact, our population of centenarians grew to 3,500 in 2016!

With an ageing population, has stemmed a booming worth in workforce numbers and a new era of what some name ‘boomerpreneurs’.

What’s fascinating is that net growth in older workers has outpaced net growth in younger workers so far, this century. The Australian workforce increased by a staggering 3 million jobs to 12 million. What’s more, an astounding 1.3 million jobs have been added in net terms to the 55 years and over age group, representing a 129% increase. In addition, net growth in the 60-64 job market since 2000 has been 165%. 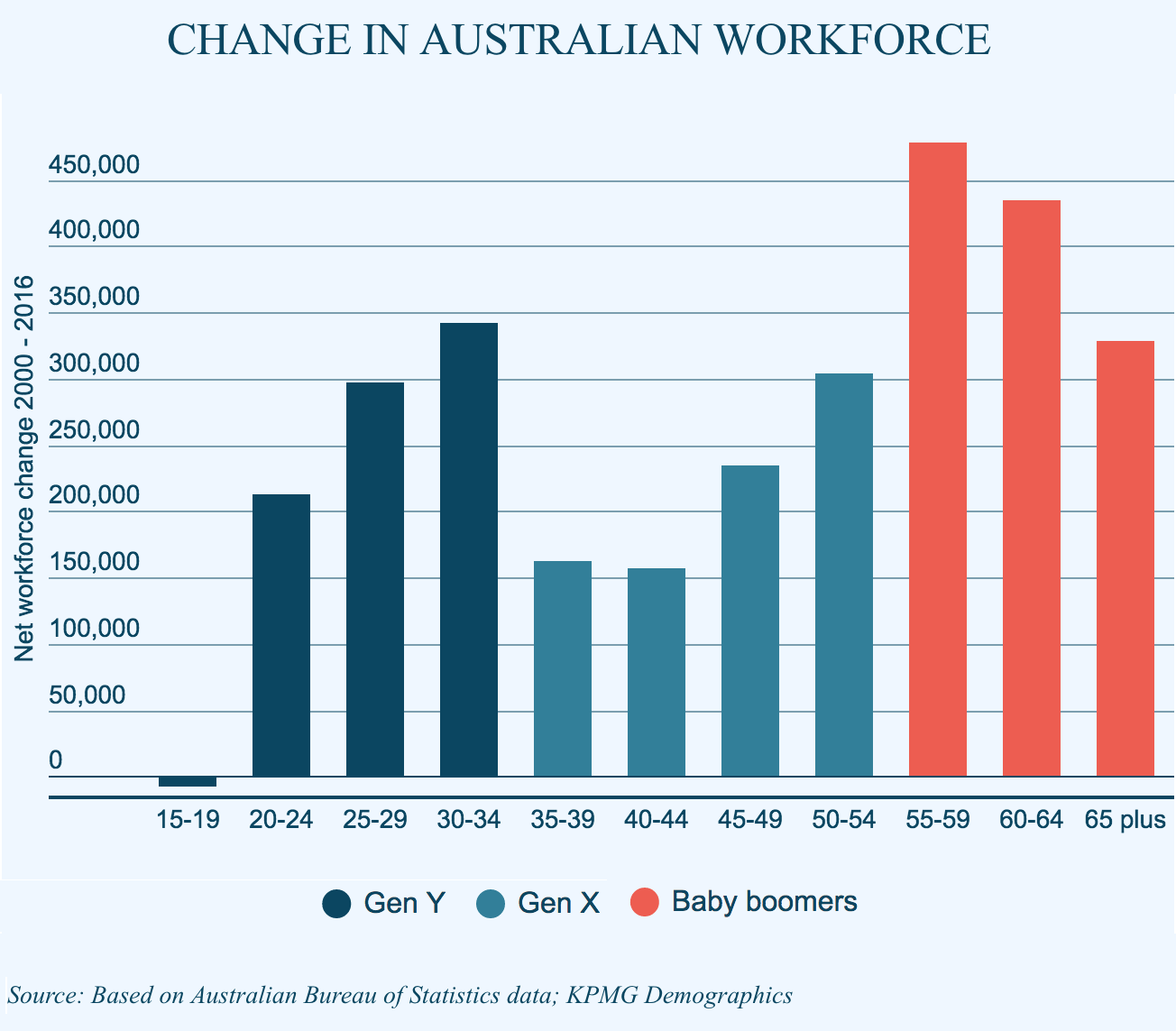 As Bernard Salt recently wrote in The Australian, “There’s another twist to the boom in baby boomer workers. I suspect that many are extending their working life by setting up small businesses or ‘working on’ as a sole trader. Essentially, coming out of corporate life in the late 50s and setting up shop as a contractor, a consultant, a mentor, a coach, a director and continue-on at a leisurely pace with selected clients working when and as you like. In fact, I think there’s a boom in boomer entrepreneurs otherwise known as boomerpreneurs.” 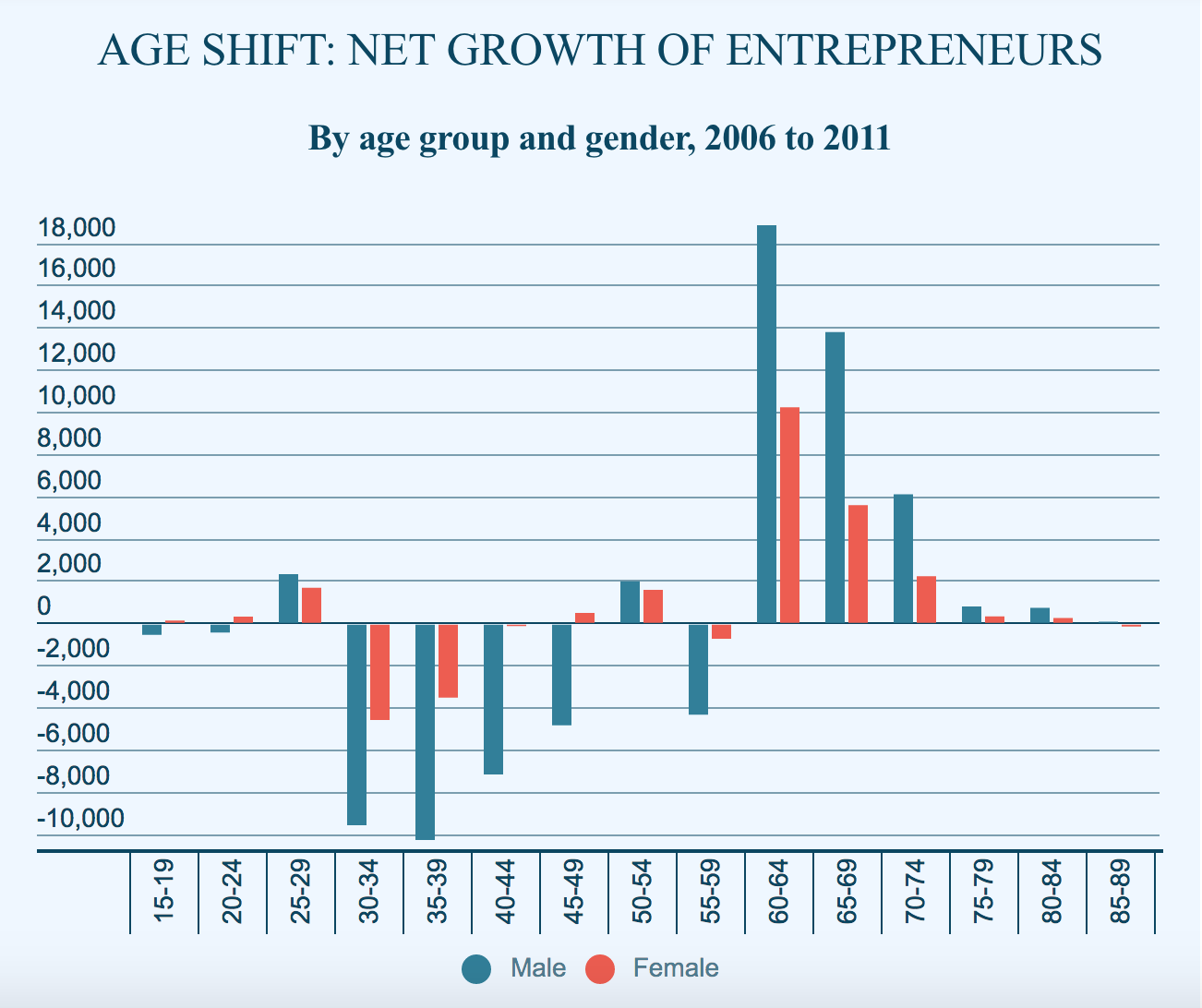 Between the 2006 and 2011 censuses the number of employers/self-employed aged 60 years and over increased by 49,000, whereas the number aged 40 years and over declined by 11,000. The shift towards older entrepreneurs fits in with a view of a greater societal change, in that today’s 60-somethings are university educated and come with big expectations of lifestyle. Settling back into ‘pension life’ isn’t as attractive a proposition as is setting up shop as an independent consultant or business owner.

Net wealth that our baby boomers contribute to Australia

What has not been measured is the taxes paid by this generation, which would lend some interesting insights and how important a generation the baby boomers are for the nation in terms of ongoing economic growth and ensuring health care and education endure.

Baby boomers to continue to drive the economy for decades

Underpinned by the baby boomer generation, the number of persons aged 65+ is set to almost double over the next two decades.

As per the 2016 Census, there were almost 3.7 million Australians aged 65 and over, representing 15.7% of the Australian population, up from 13.0% a decade ago. The increased proportion of persons aged 65+ in the population is the result of the baby boomer generation flowing through to the 65+ age cohort. As highlighted the above graphs, population growth for the 65+ age cohort has picked up significantly over the past decade, averaging 3.3% per annum from 2006, compared to 1.0% for persons aged less than 65 over the same period.

Looking ahead, population growth amongst the 65+ age cohort is projected to be significant. By 2036, it is expected that there will be almost 6.6 million persons aged 65+, at which point they will represent almost 21% of the Australian population.

So what does this mean for the Australian economy? A continual shift in the job market for 65+ contributed by ongoing shift of ‘boomerpreneurs’.

Read part 2: Where are most of our baby boomers living in Australia?