Regardless of age, a stroke can happen to anyone, anywhere – and knowing the warning signs and symptoms, and what to do – might prevent death or worsened health conditions at recovery.

If the stroke occurs toward the back of the brain, for instance, it’s likely that some disability involving vision will result. The effects of a stroke depend primarily on the location of the obstruction and the extent of brain tissue affected.

The effects of a stroke depend on several factors, including the location of the obstruction and how much brain tissue is affected. However, because one side of the brain controls the opposite side of the body, a stroke affecting one side will result in neurological complications on the side of the body it affects.

Did you know that people who are treated with a blood clot-dissolving drug within 4.5 hours of symptoms have a greater chance of recovering without major disability?

Fact #3: about one in four stroke survivors is at risk for another. Fortunately, up to 80 percent of second clot-related strokes may be preventable.

Fact #4: prevention is key. Had a stroke? Create a plan with your doctor to prevent another, which may include managing high blood pressure and discussing aspirin or other medicine. Aspirin is not appropriate for everyone, so be sure to talk to your doctor before you begin an aspirin regimen. Now that you know prevention, here’s how you spot one. Learn the FAST warning signs (listed below).

Left vs right side of the brain if a stroke occurs

Left Brain
If the stroke occurs in the left side of the brain, the right side of the body will be affected, producing some or all of the following:

Right Brain
If the stroke occurs in the right side of the brain, the left side of the body will be affected, producing some or all of the following:

How to spot a stroke and react F.A.S.T.

Educate yourself on the warning signs of stroke. Experts use the acronym F.A.S.T. to remind people how to recognise the signs of a stroke and what to do.

Face Drooping
Does one side of the face droop or is it numb? Ask the person to smile. Is the person’s smile uneven or lopsided?

Arm Weakness
Is one arm weak or numb? Ask the person to raise both arms. Does one arm drift downward?

Speech
Is speech slurred? Is the person unable to speak or hard to understand? Ask the person to repeat a simple sentence.

Time to Call an Ambulance
If the person shows any of these symptoms, even if the symptoms go away, call 000 or an ambulance and get them to the hospital immediately. 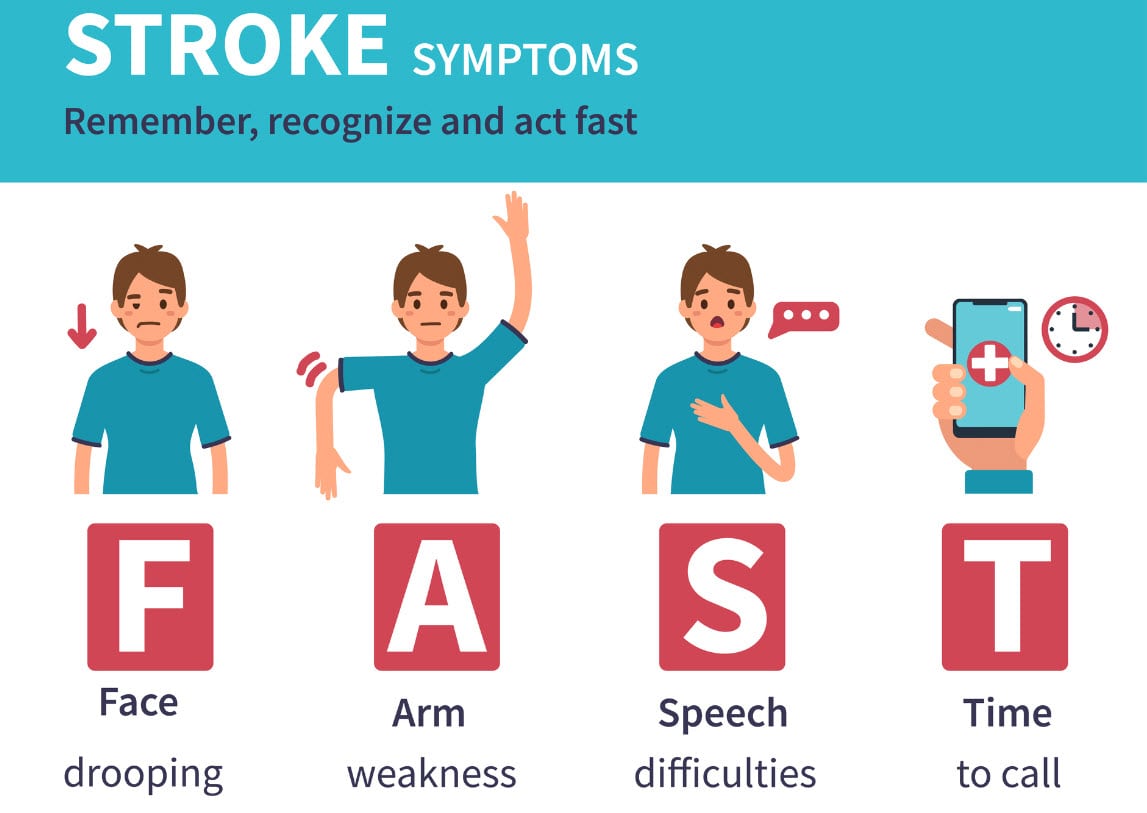 If you’re having a stroke, it’s critical that you get medical attention right away. Immediate treatment may minimise the long-term effects of a stroke or even prevent death. Thanks to recent advances, stroke treatments and survival rates have improved greatly over the last decade.

Signs and symptoms of a stroke in both men and women include:

If someone shows any of these symptoms, call and ambulance or emergency medical services immediately. Minutes matter in treating stroke. Calling a doctor or driving to the hospital yourself wastes time. The National Institute of Neurological Disorders and Stroke (NINDS) emphasises that getting emergency help within an hour can prevent long-term disability or death.

Just as strokes have many effects, they also have many causes. Learn the various types of stroke and related treatment.

You may be reluctant to call emergency services if you aren’t sure whether someone’s having a stroke, but people who get treatment sooner have a major advantage. Ambulance workers can judge your situation sooner, and that boosts your chance of getting the treatment you need as soon as possible.

People who are treated with a blood clot-dissolving drug within 4.5 hours of symptoms have a greater chance of recovering without major disability, according to 2018 guidelines from the American Heart Association (AHA) and American Stroke Association (ASA).