Where Are The Most Popular Retirement Regions in Australia?

The Australian Bureau of Statistics (ABS) recently published population estimates by age and sex which provides a timely opportunity to look at the housing market performance of those council areas nationally which are most popular with over 65’s.

Queenscliffe in Victoria was the council region that had the highest proportion of residents aged over 65 years of age at the end of June 2016. Although Queenscliffe has relatively few residents overall (2,904), 40.3% of the council area’s residents were at least 65 years old.

The accompanying list highlights the 50 council areas nationally with the highest proportion of residents aged at least 65 years of age. What is immediately noticeable is that not one of these 50 council areas is located within a capital city. In fact, if you list all councils nationally by their proportion of residents aged at least 65, the first capital city area listed is Holdfast Bay in Adelaide with 23.1% of its residents at least 65 years old. Council areas within New South Wales and South Australia also dominate the list with each of these states having 13 entries on the list. 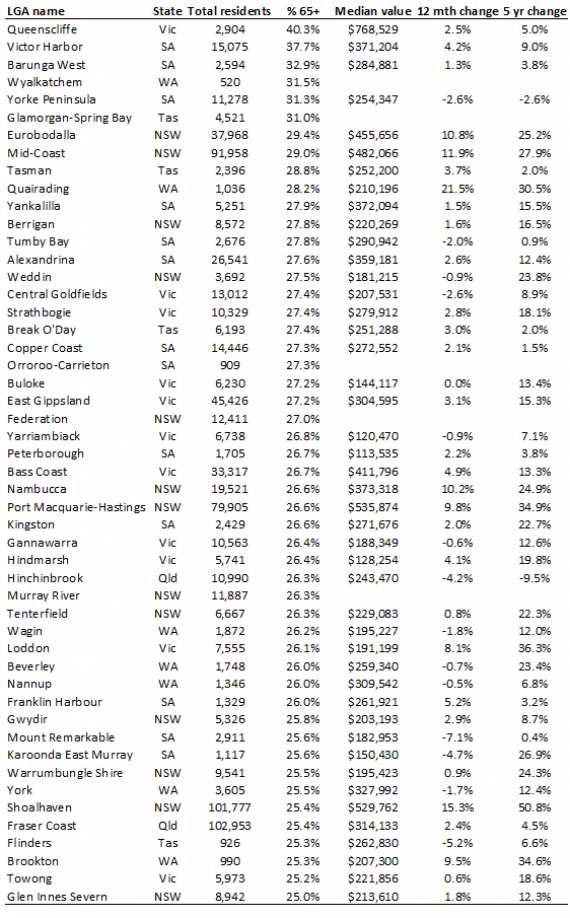 A further feature of the list is that these retiree-centric council areas tend to have significantly lower median house values than the individual state capital city housing markets. This may be due to retirees moving to areas where housing is more affordable in order to free-up capital for them to enjoy their retirement, it could also be out of necessity due to the high cost of housing within most capital cities. The locations are also likely to be linked to lifestyle preferences, with a large number of the top council areas located in regional coastal areas.

Looking at the value growth performance for houses across these top 50 regions, the data shows that generally the rate of growth has been lower than that of the larger capital cities. 31 of the 50 council areas listed have seen house values rise over the past year.

The small council area of Quairading in Western Australia’s Wheat Belt region has seen the greatest growth over the year (+21.5%) followed by Shoalhaven in New South Wales (+15.3%). Of those council areas that have recorded house value falls over the past year, the greatest falls have been recorded in Mount Remarkable in South Australia (-7.1%) and Flinders in Tasmania (-5.2%).

This story was first published by CoreLogic Australia by Cameron Kusher on 4 September, 2017. Read article.