So, where were Australia’s top performers in residential real estate over 2021?

CoreLogic’s annual Best of the Best 2021 report is the most comprehensive overview of top performing residential markets and provides suburb-level insights across a variety of measures to reveal Australia’s strongest performers over the year.

The extraordinary momentum carried over from 2020, coupled with monetary and fiscal stimulus measures has contributed to an unprecedented year of growth and litany of outstanding results for the Australian residential housing market.

In the 12 months to 30 November, property values surged by 22.2% nationally, the largest annual increase since 1989. The synchronised upswing saw almost every capital city and rest of state region reach record high values, with the exceptions of WA and NT.

“The popularity of regional Australia is reflected in many aspects of the Best of the Best report for 2021,” she said.

“The quiet coastal suburb of Yamba, in the Coffs Harbour-Grafton region of NSW, achieved the highest annual growth in units of suburbs across Australia, at 56.6%. Regional suburbs were represented in many of the top value growth tables, including Ocean Grove units in Geelong (up 41.7% in the year), Fraser Island units in Wide Bay (up 48.2%), and Campbell Town houses in Tasmania (up 50.5%).”

Rental value appreciation was also high over the year to November with national rents recording the highest annual growth rate since January 2008 at 9.4%. This was led by growth of 12.5% across the combined regional market, compared with 8.3% across the combined capital cities. Unlike 2020 however, rental market increases have become more broad-based. Even the Melbourne unit market, which saw a peak to trough decline in rents of -8.5% between March 2020 and May 2021, has seen a recovery trend, with rent values now 1.7% higher over the year.

The expansion of housing credit has also seen more elevated levels of potentially risky lending, which prompted a response from the banking regulator, APRA. Through October, the regulator announced changes to borrower serviceability assessment, which may slow credit growth moving forward, particularly in the investor segment.

Additionally, affordability has become a larger constraint on demand. The ratio of dwelling values to household incomes reached a new record high of 7.7 in June 2021, as did the number of years it takes to save a 20% home loan deposit (10.2 years).

It’s likely Australia’s property market has seen the peak of value increases as worsening affordability constraints, a surge in vendor activity and a recent tightening of housing finance conditions take effect. While providing an outlook for the 2022 market, Ms Owen noted the likelihood that sales and listings activity had also likely peaked.

“The constraints of slightly tighter credit conditions, the erosion of housing affordability and a higher level of listings being added to the market are expected to see softer growth rates across property values in 2022,” she said.

“These forces are an accumulation of headwinds for property market performance. Softer growth rates are likely to coincide with fewer purchases, where sales and listings activity eventually move with momentum in price.”

However, a slowdown in buyer and seller activity also mean a slowdown in debt accrual for Australian households. This may also mitigate the need for further interventions around risk in housing lending, following the increase to serviceability assessment buffers for borrowers by APRA in October.

This article provides a snapshot of some of the top 10 suburbs from CoreLogic’s 45-page Best of the Best report in 2021.

The Best of the Best 2021 highlights the top performing houses and units across Australia based on the following criteria:

All data highlighted is current as at the 30 November 2021, with the exception of Total Value of Sales data which reflect sales that occurred over the 12 months to 30 September 2021. Learn more. 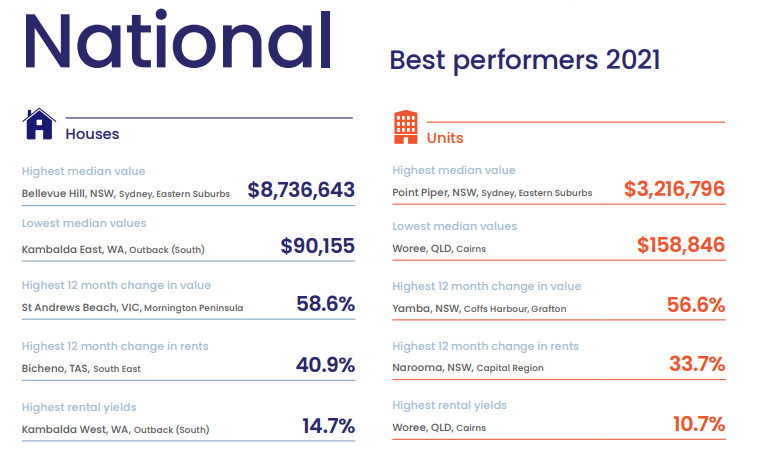 Highest Median Values for 2021 across Capital Cities and Regional 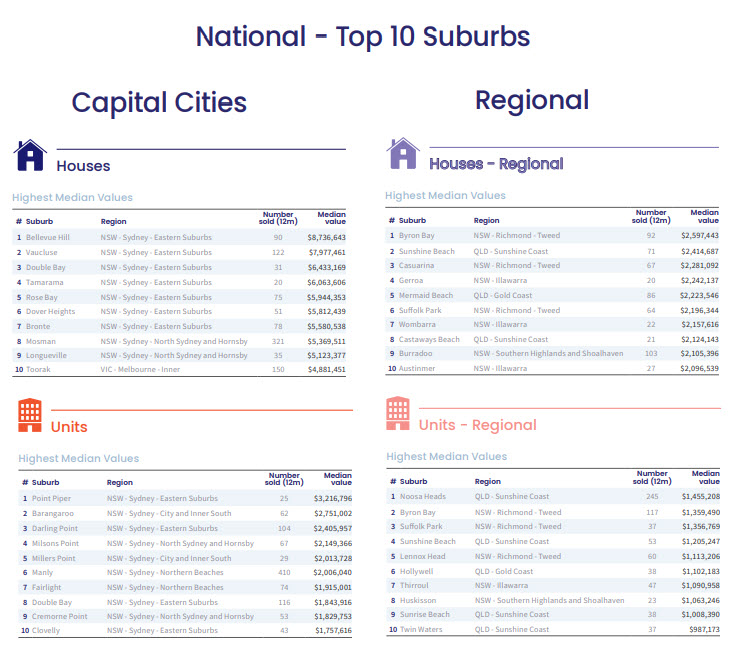 Lowest Median Values for 2021 across Capital Cities and Regional 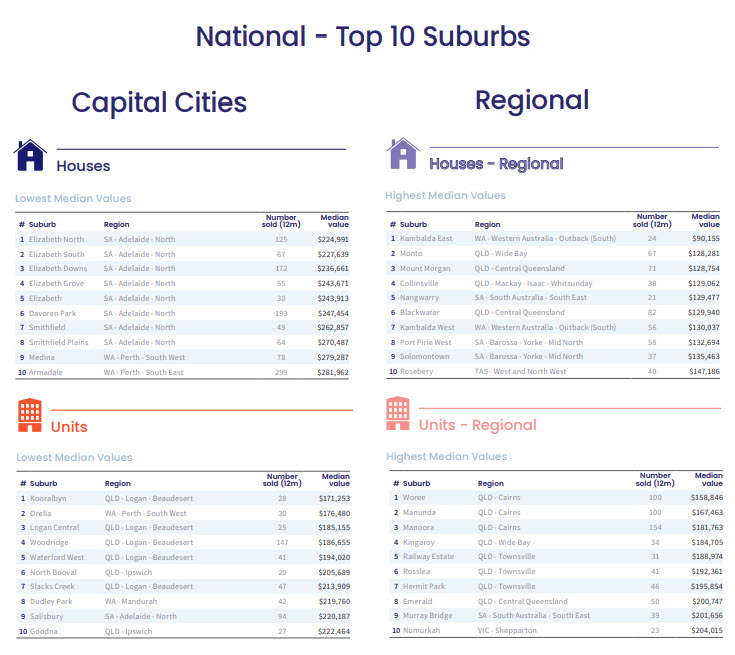 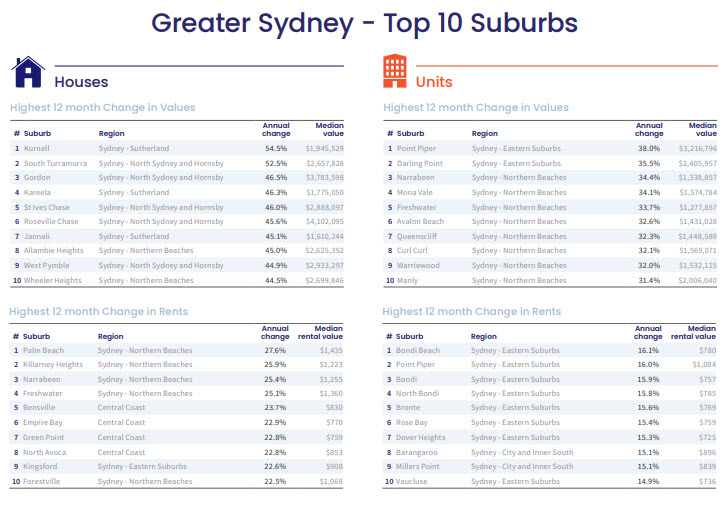 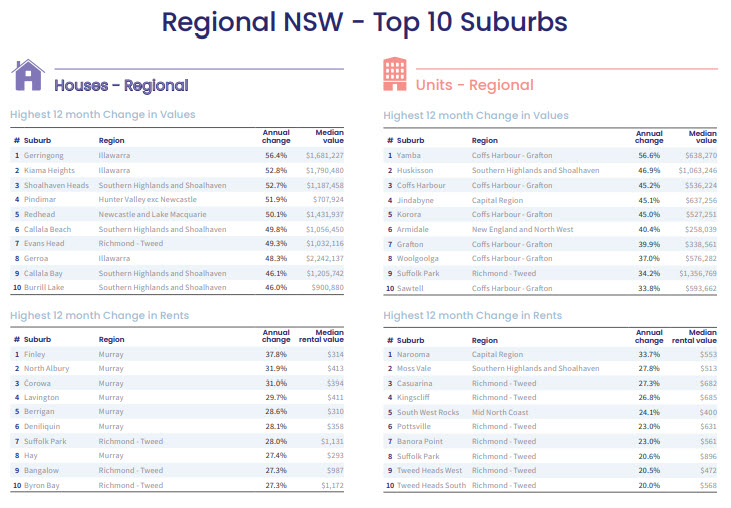 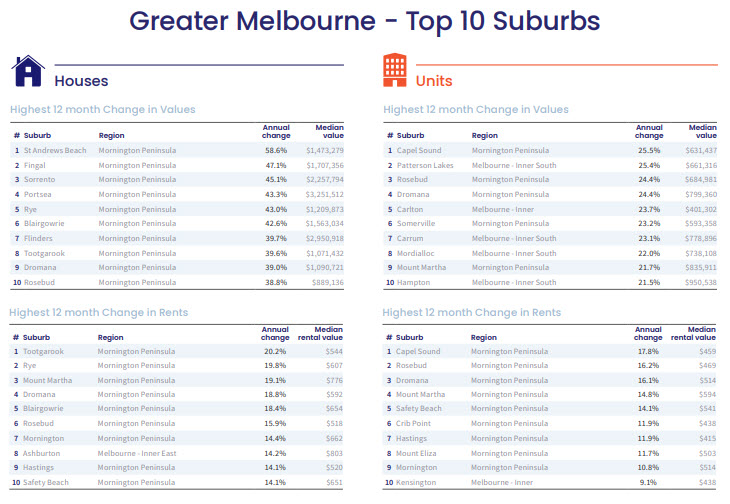 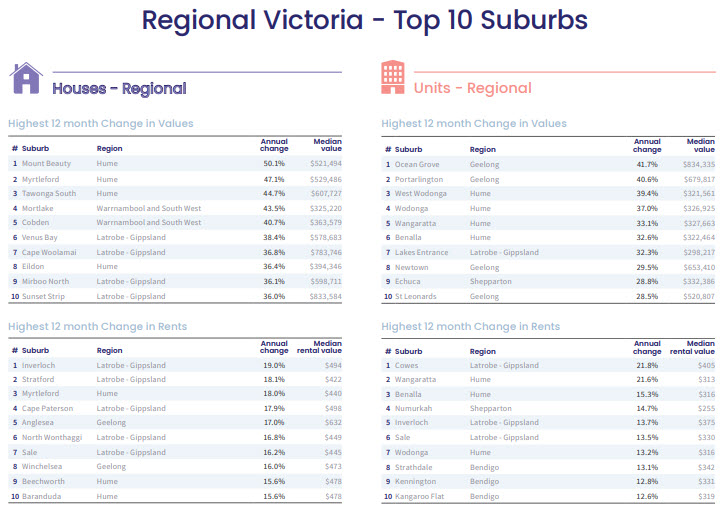 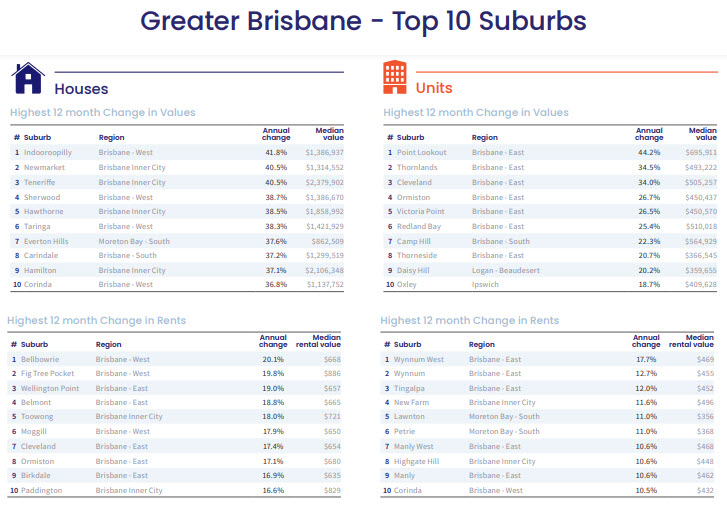 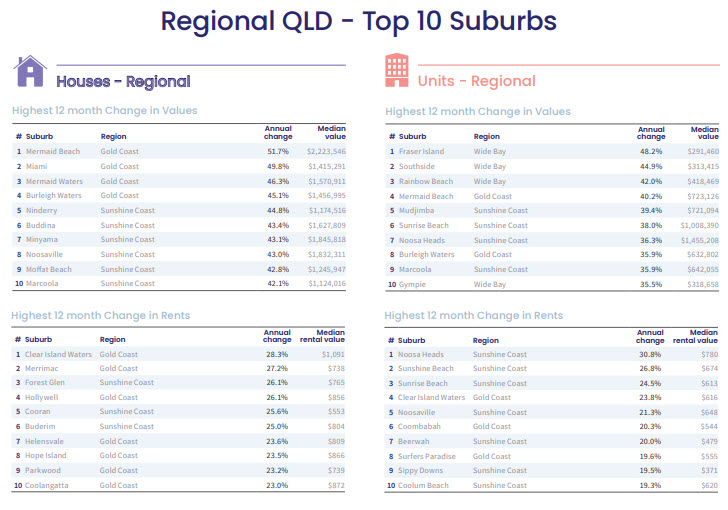 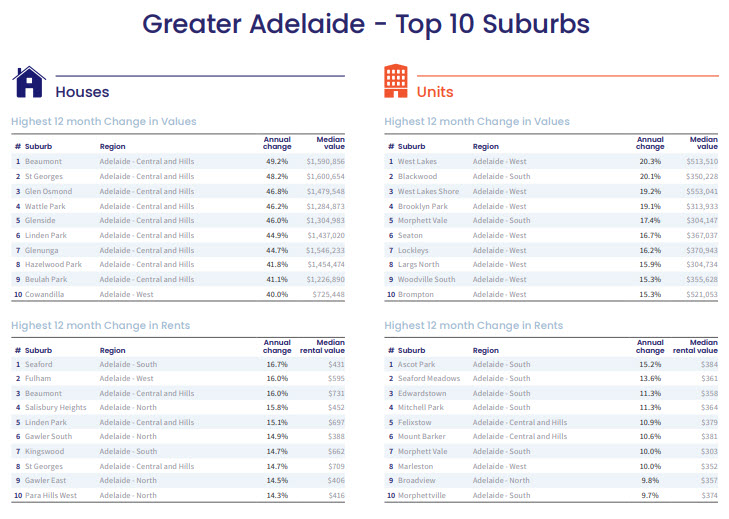 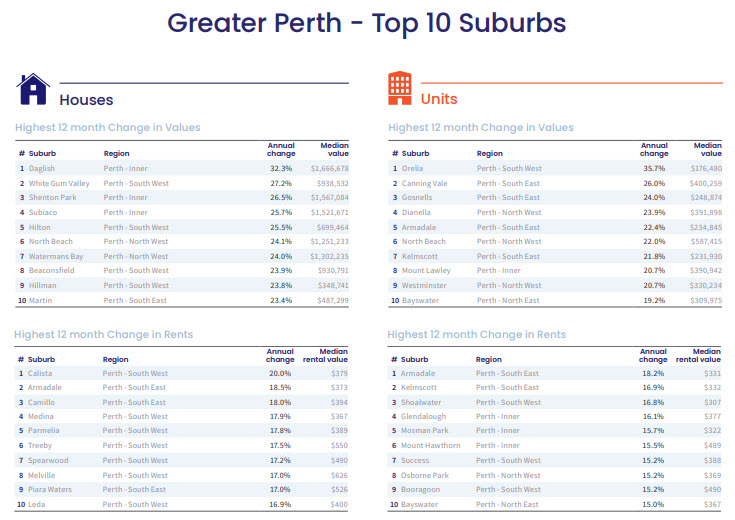 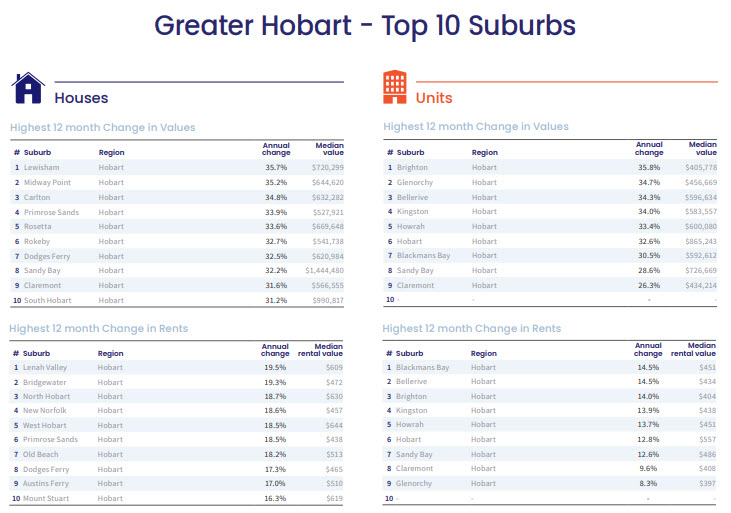 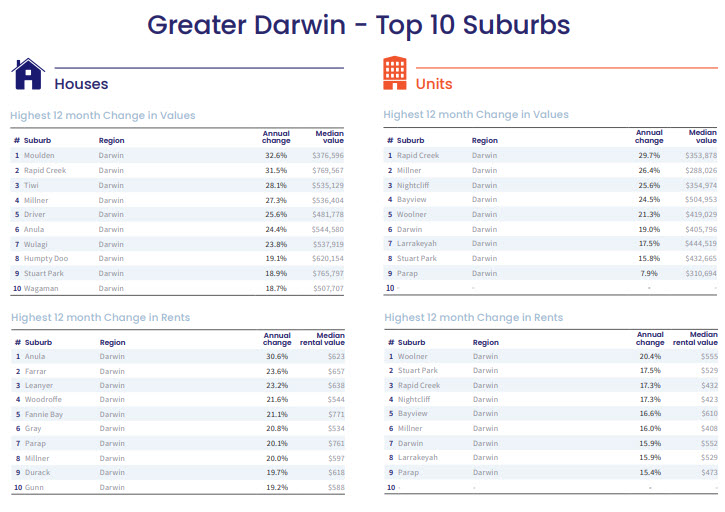 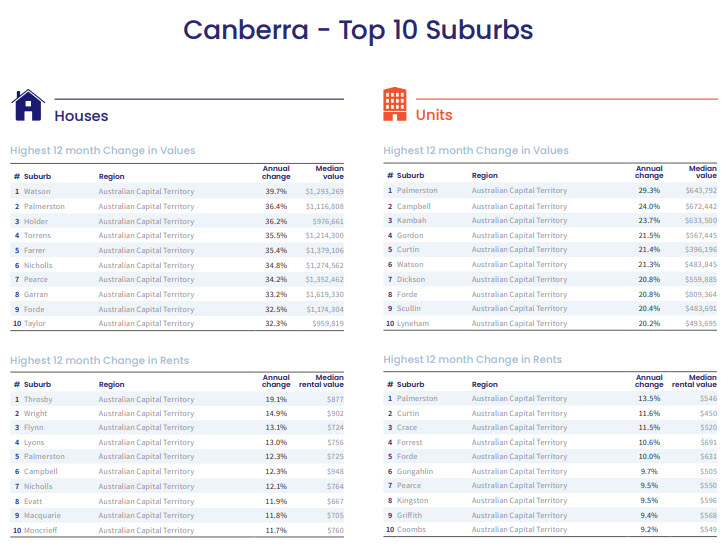 To compare this year’s top 10 suburb performers to previous year’s – read our blogs with links to the full CoreLogic report:

CoreLogic’s Best of the Best report for 2021 gives you all the property data you need to track the results of this historic year. The report highlights Australia’s best and worst performing suburbs based on sales, rents and property values, as well as providing a 2020 market review. Download report here.

All data highlighted is current as at the 30 November 2021, with the exception of Total Value of Sales data which reflect sales that occurred over the 12 months to 30 September 2021.

Top sales are based on properties that have transacted over the 2021 year to date – please note there may be sales we are not yet aware of due to the lag in reporting times, long settlements and non-disclosures.

Median Sales AVM value – A measure of the median (50th percentile) estimated sales value of all properties based on the hedonic imputation method, irrespective of whether it transacted or not.

AVM observations – The total number of Automated Valuations that have been run.

12 month sales volumes – A count of all transactions over the 12 months.

Total Value of Sales – the total value of all property transactions recorded over the 12 months to September 2021.

12 month change in value – the percentage difference between the hedonic home value index as at 30 November 2021 compared to 12 months ago.

12 month change in rents – the percentage difference between the hedonic rental value index as at 30 November 2021 compared to 12 months ago.

Gross Rental Yields – A measure of the implied yield of properties based on the underlying sales values and ‘for rent’ listings values of properties using the hedonic imputation methodology.