Budget22 • What it means for older Australian’s 🧐

As expected, the Morrison government’s pre-election budget had plenty of sweeteners.

Here’s what might be most relevant to older Australian’s.

The government committed to extending its changes to the superannuation minimum drawdown requirement for another year.

“The government has extended the 50 per cent reduction of the superannuation minimum drawdown requirement for account-based pensions and similar products for a further year to June 30, 2023,” the budget documents said.

“The minimum drawdown requirements determine the minimum amount of a pension that a retiree has to draw from their superannuation in order to qualify for tax concessions.”

While the budget billed this measure as “supporting retirees”, experts clarify that it would really only benefit retirees who have already accumulated substantial wealth outside super.

“The extension allows individuals who have access to outside funds to withdraw less than they would ordinarily have to under the normal policy conditions. Meaning you can retain more in their super pension account – which is tax-free – for longer,” says Peter Burgess, deputy chief executive of the SMSF Association. 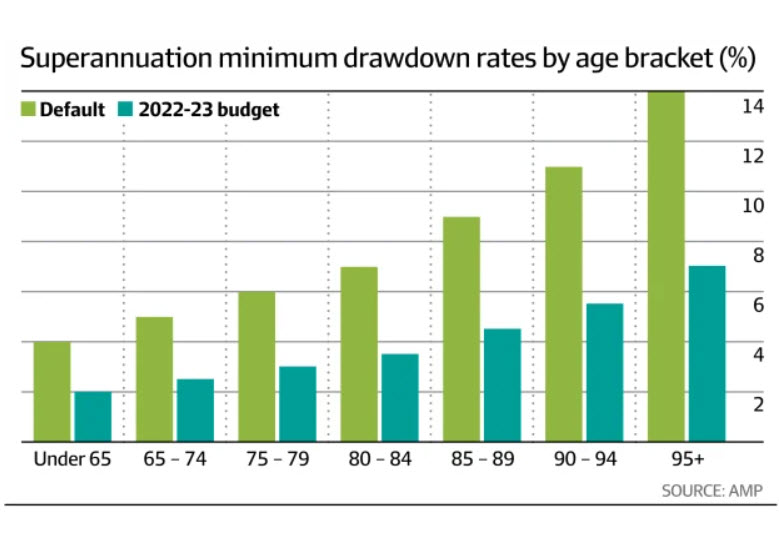 Benefits in keeping more money in your Super
Wealth held in a super fund in pension mode incurs no tax on income and capital gains, she points out – as opposed to income held in an individual’s name, which is taxed at marginal rates.

But tax advantages are not the only potential benefit. The extension of the minimum drawdown also provides “continued flexibility” on how much retirees need to withdraw to fund standard of living.

Plus, while the policy may be aimed at retirees, all super fund members may profit from the extension regardless of their age or distance from retirement.

However, this measure may not be suitable for all retirees. Retirees need to estimate their annual expenditure and get a good grasp on how much income they can live on comfortably.

They can then decide to reduce their pension payments in line with their budget estimate and conserve more of their account-based pension capital if it suits.

Which means patients will get access to cheaper or free medicines sooner, in a measure the government is counting as part of its cost of living package.

Lower safety net thresholds for the PBS mean potential savings for retirees, and may create an opportunity for others who have “grandfathered” account-based super pensions.

“This is good news for self-funded retirees who do not hold a Commonwealth Seniors Health Card,” says Colin Lewis, head of strategic advice for Fitzpatricks Private Wealth.

Many CSHC holders have account-based pensions that are “grandfathered” after the income test rule change on January 1, 2015. Account-based pensions started after that date are deemed under the card’s income test, whereas nothing counted with existing pensions. For this reason, many are reluctant to switch pensions or super funds for fear of losing their CSHC.

With medication management long regarded as the bane of residential aged care, funding to link care facilities with community pharmacists and onsite pharmacists should bring some comfort to residents and nurses.

The delivery of wrong and or excessive medication has long been an issue waiting to be addressed.
The ongoing release of 80,000 home care packages in 2021-2023 – taking the total to about 275,600 people by June next year – is welcome confirmation of intentions to assist older Australians to remain living independently at home.

Additionally, the $48.5 million for 15,000 additional aged care training places for new and existing personal care workers, to a total of 48,800 places, is a positive move.

Sticking with the commitment to reform the residential aged funding model through the introduction of the Australian National Aged Care Classification Transition Fund, the budget included an additional $34.60 per bed per day.

Council on the Ageing chief executive Ian Yates will be looking to see that the additional money is spent on increasing the number of care minutes with residents as intended by the royal commission, which recommended care homes have a target of 200 minutes per resident per day.

Exactly how that will be measured is yet to be worked out. But Yates wants the government to commit to publishing how many minutes of care each residential facility is being funded to deliver, compared to the number of minutes actually delivered, as part of its new star rating system.

With an election on its way, there is still hope for further announcements that will directly benefit older Australians and those that deliver the care they deserve.

For more details within the Budget 2022-23, read the Budget Overview or Budget At A Glance on the Australian Government’s website.