Key findings from the Survey of Disability, Ageing & Carers (SDAC)

This publication presents information from the 2015 Survey of Disability, Ageing and Carers (SDAC).

In this article, we’ve taken some key findings from the Australian Bureau of Statistics (ABS) release of the most recent Survey of Disability, Ageing and Carers (SDAC). We also look at the proportion of older Australians with a long-term health condition, Social participation numbers from those over 65 years and the population characteristics.

The SDAC also collects information from older people (those aged 65 years and over) to determine how ageing impacts a person’s life and experiences. Like many other developed countries, Australia has an ageing population. There were around 3.5 million older Australians in 2015, representing one in every seven people or 15.1% of the population. This proportion has increased from 14.3% in 2012, making it increasingly important to understand the characteristics and needs of older Australians. 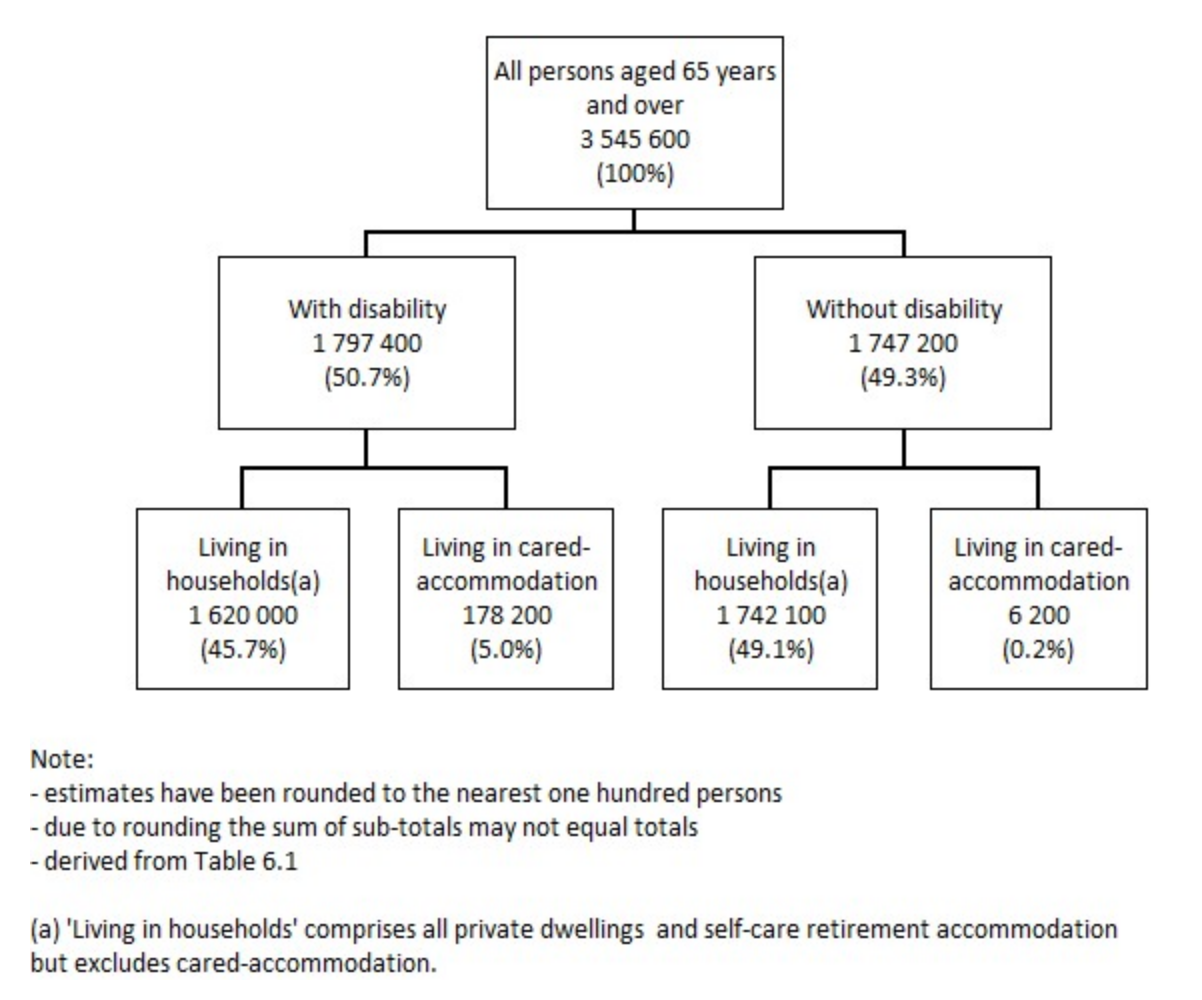 Information about carers is another important component of the SDAC. In the survey, a carer is defined as a person who provides any informal assistance, in terms of help or supervision, to older people (aged 65 years and over) and those with disability. Assistance must be ongoing, or likely to be ongoing, for at least six months. A primary carer is the person who provides the most informal assistance to a person with disability with one or more of the core activities of mobility, self-care and communication. In this survey, primary carer information was collected for people aged 15 years and over.

The information collected provides an insight into many different characteristics of carers and how caring impacts on their lives. In 2015, almost 2.7 million Australians were carers (11.6%), with 856,100 people (3.7%) aged 15 years and over identified as primary carers. These patterns were similar to those in 2009 and 2012.

The proportion of older Australians with a long-term health condition, that is, a disease or disorder that has lasted, or is likely to last, for six months or more, has remained relatively stable in recent years. Almost nine in ten (87.2%) older Australians reported that they had one or more long-term health conditions in 2015. This is similar to the 2012 rate of 86.6%.

In 2015, of those older Australians with one or more long-term health conditions, the most commonly reported main conditions were:

The proportion of older Australians with a mental or behavioural disorder as their main condition was 6.5%, with 2.8% of all older people reporting Dementia or Alzheimer’s disease as their main long term health condition.

Many older Australians are active members of their communities with strong social connections. In 2015, almost all older Australians living in households had participated in one or more social activities at home (97.9%) or outside the home (93.6%) in the last 3 months. The majority of older people interacted with their family or friends through telephone calls (93.2%), being visited at home (90.7%) or visiting them (85.8%). Over three-quarters (76.8%) had participated in at least one cultural or physical activity away from home, in the 12 months prior to the survey.

A considerable proportion of older people participated in a range of cultural activities in 2015. Almost half (47.8%) of older people living in households had attended a movie, concert, theatre or performing arts event in the 12 months before the survey, while almost a quarter (23.5%) had visited a museum or art gallery.

Older people make a considerable economic and social contribution to the community through unpaid work. In 2015, almost one in five (18.6%) older Australians living in households were actively involved in voluntary or community service activities outside the home in the previous three months.

Sidenote:
– Chapter three of 60+Club’s eBook explores the benefits of staying social, as well as positive impacts of volunteering in more depth. Entitled ‘The Why’s Of Goodness‘, chapter three specifically discuses Why being social is good for your health and Why being generous after 60 is good for you.

Most older Australians (94.8%) were living in households in 2015, while one in twenty (5.2%) lived in cared accommodation such as nursing homes and aged care hostels. Over one-quarter (26.8%) of all older people lived alone.

There are differences in the distribution of older Australians (living in households) between the states and territories. In 2015, both Tasmania and South Australia had significantly higher proportions of older people as a percentage of their total population than other states (17.8% and 16.7%, respectively), while the Northern Territory had the smallest proportion of older people (7.6%).

Person’s aged 65 years and over – Proportion of total population, by State and Territory 2015 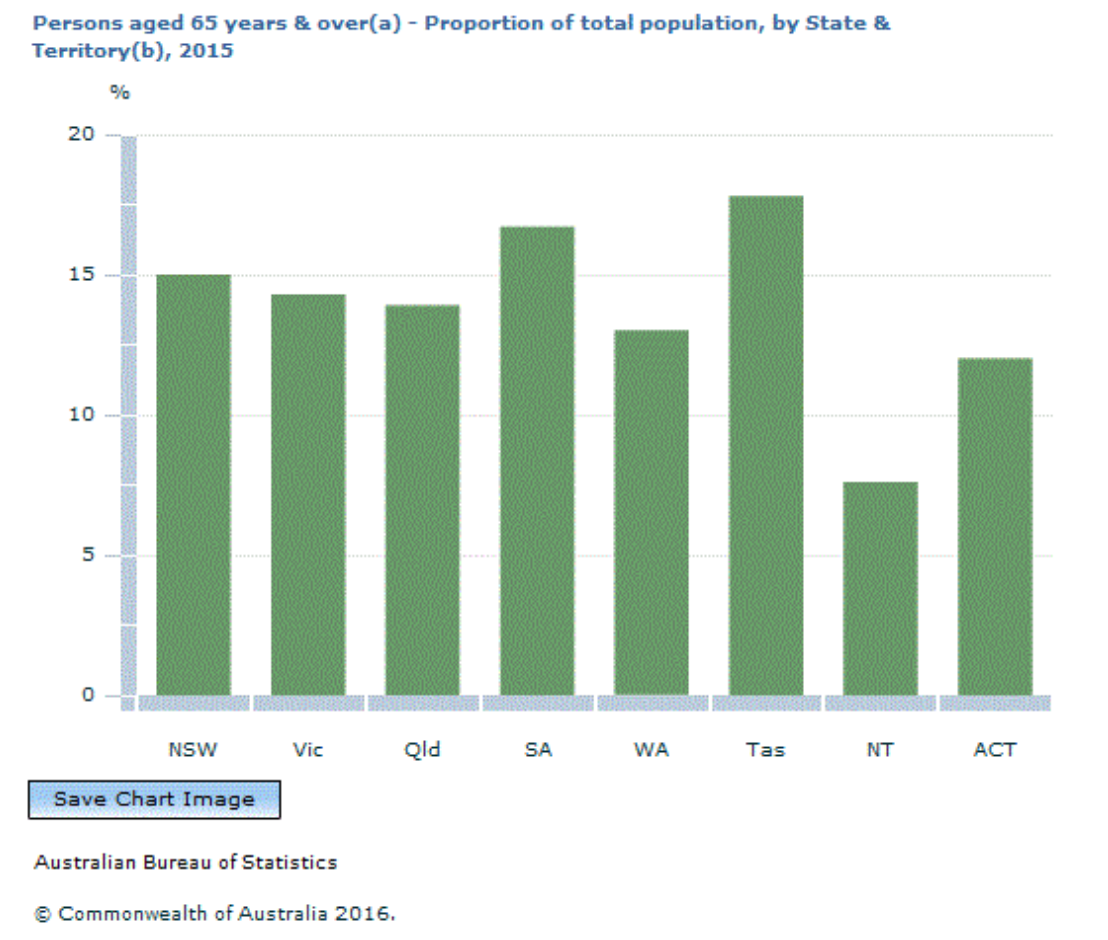 Footnote(s): (a) Living in households (b) Excludes very remote areas, which make up 22.9% of the total NT population